East and West - Our Lives

Learning to appreciate our cultural differences is going to take us beyond our earthly life. Below is a segment of a testimony by a lady during her missionary life in a state in America in the early years.

At one of these conferences there was a church holiday and Pres. Young Whi Kim asked me to organize the state leaders into a skit as part of the entertainment. We decided to do a comedy review of our experiences with Father on the speaking tour. In one of our scenes, one beefy member by the name of Gil and the diminutive Helen Chin Alexander did a hilarious imitation of Mrs. Choi translating for Father. They spoofed how Father would say strong things in a strong way and then Mrs. Choi would translate it all in a soft, feminine way. The skit was a hit, indeed hilarious, and Father and Mother were rolling in the aisles. Later, Pres. Kim told me in the nicest way that one does not do spoofs of the Messiah. Of course. I was mortified. Just like True Parents to absorb our ignorance with a big heart.

I disagree with the conclusion. True Parents did not have to absorb the ignorance of one of their children. True Parents enjoy the skit, plain and simple. We have much to learn from our Eastern brothers and sisters, but so do they from the Western world. Our freedom of expression is part of God’s plan to spread joy and love.

I have said many times in the past that a joke is only acceptable when both parties enjoy it, and no one feels put down or mock. I believe that True Parents during this moment of laughter due to the skit actually gave them the vitality to continue their so demanding and difficult mission. 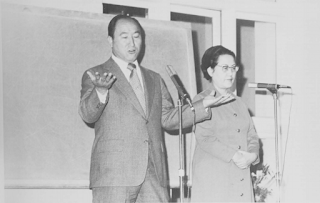