Good Friday: The best or the worst day in human history?

Is there something good about "Good Friday"? I attended many of them while growing up and I truly enjoyed every religious ceremonies. I felt close to God and it is there that I started my relationship with our Heavenly Father. As years past by, I started to re-think about all these events of long ago and today I am not sure that all of them were the first choice in the way that God wanted humankind to handle things.

The crucifixion of Jesus was the result of His mission being interrupted. When Jesus started there were no talks about crucifixion (see Matthew 4:23-24) it is only when he realized that he could not do what he wanted that he started to speak about his path of suffering. Anyone who rejoices in the death of Jesus may not understand that God is our parent. No individual, worthy of that title, would ever rejoice in the death of their offspring.

Wikipedia says: "Good Friday (from the senses pious, holy of the word "good"), is a religious holiday observed primarily by Christians commemorating the crucifixion of Jesus Christ and his death at Calvary."
GotQuestions.org respond to the question, "Why is Good Friday referred to as good?": What the Jewish authorities and Romans did to Jesus was definitely not good (see Matthew chapters 26-27). However, the results of Christ’s death are very good! Romans 5:8, “But God demonstrates his own love for us in this: While we were still sinners, Christ died for us.” First Peter 3:18 tells us, “For Christ died for sins once for all, the righteous for the unrighteous, to bring you to God. He was put to death in the body but made alive by the Spirit.

The inevitable death of Jesus was a second choice, and the only choice available to redeem the failure of humans to recognize Jesus as the son of God. By accepting this second choice and allowing Satan to kill him, Jesus opened the door for spiritual salvation, but let us think this through as it may not have been what God had intended from the beginning.


Rev. Moon speaks about, “Jesus and The Second Coming” 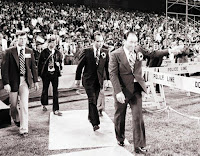 Jesus was a messenger of God who criticized people for being blasphemers and being like serpents and he certainly made some people angry. If Jesus had told the people of his time that they were wonderful children of God, would he have been killed?  What would have happened if the nation of Israel had wholeheartedly accepted Jesus Christ? Imagine the nation of Israel united with Jesus. What would that have meant? First of all, Jesus would not have been killed.  He came to erect the Kingdom of God on earth, but instead he had to caution his disciples even to keep his identity a secret because people did not accept his legitimacy as the Messiah, and he therefore lacked the power to be the King of kings.

Today we have much to learn, and we must not believe blindly. We must know the hidden truth behind the Bible. Jesus was crucified, not by his own will, but by the will of others. Jesus Christ was killed because humankind would not have faith in him as Messiah. Jesus Christ was murdered. People living at the time of Jesus Christ made a terrible mistake. According to Jesus, John the Baptist was Elijah. But alas, John himself denied that he was Elijah when he was asked! His denial made Jesus seem to be a liar. This was such a grave situation. The crucifixion of Jesus was a result of human faithlessness. If death on the cross had been fulfillment of God's will, Jesus would certainly have prayed instead, "Father, I am honored to die on the cross for your will."

The prayer of Jesus at the garden of Gethsemane did not come from his fear of death or suffering. Jesus would have been willing and ready to die a thousand times over if that could have achieved the will of God. He agonized with God together in the garden, and he made one final plea to God, because he knew his death would only cause the prolongation of the dispensation.

Dr. Richard L. Rubenstein a historian of religion who received his theological training at Harvard University says this about Rev. Moon:

"Of one thing concerning your messianic vision I am certain: all of your works, from which the world has already derived so much benefit, have sprung from your messianic vision. Without it, there would be no ICUS, no PWPA, no Washington Times, no Assembly of the World's Religions, no Little Angels School, no revivified University of Bridgeport; without your messianic vision, your original tiny church in Pusan would never have become the worldwide religious force for human betterment you now lead."
Posted by Anne-Marie Mylar at 3:20 PM

Email ThisBlogThis!Share to TwitterShare to FacebookShare to Pinterest
Labels: Jesus